For years, UV light treatment equipment has been used, and is sometimes mandatory, in health care facilities, commercial buildings, hotels, schools, daycare centers and food processing plants. Today it is becoming even more common in the home to sterilize and neutralize airborne bacteria, molds, dust mites and odors. 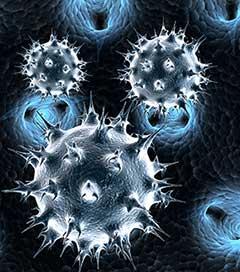 While independent research has not been done on the technology’s effectiveness to reduce airborne bacteria and allergens in the home, a 2003 study published in The Lancet medical journal found ultraviolet light purifiers used in three office buildings reduced overall worker sickness by about 20 percent, including a 40 percent drop in breathing problems. The ultraviolet lamps were aimed at the cooling coils and drip pans in the ventilation systems of the buildings. The lights were turned on for four weeks; then turned off for 12 weeks. The cycle was repeated three times for almost a year. The use of the lights resulted in a 99-percent reduction of the concentration of germs on irradiated surfaces within the ventilation systems.

Installed in the main supply or return duct of an air-source heat pump or air conditioning system, UV lights disinfect the air stream as it passes through the HVAC system. The lights usually operate continuously 24 hours a day, but only require between 15 Watts to 85 Watts depending on the system.

UV lights do not typically disinfect the air flowing through your ducts in just one pass, but your home's air re-circulates more than 50 times a day during normal operation of a heat pump or air conditioning system, and with every pass more and more contaminants are destroyed.