Chilled beams have been used in Europe and Australia for approximately two decades and are just now becoming better known in the United States marketplace. While chilled beams offer numerous benefits, their energy efficiency makes them especially attractive for building owners and facility managers. They also are appealing to architects and engineers who are seeking  LEED® points from the U.S. Green Building Council (USGBC).

Chilled beams are essentially ceiling- mounted diffusers operating like fan coils without fans. They deliver cooling or heating via circulated chilled or heated water rather than by air. Water is cooled to approximately 59º F to 65º F (or heated to approximately 85º F to 115º F) and is pumped to the chilled beam units. The lower water temperatures increase the coefficient of performance (COP) of the chiller plant. Chilled beams are 2 ft. wide and are available in various lengths, up to 10 ft. They fit into the ceiling like a diffuser and the installation is generally straightforward.

Both passive and active types of chilled beams are beginning to be applied in North America. Active chilled beams are either flush mounted in the ceiling or exposed below the ceiling. A third type, multiservice, integrates other building services such as lighting, sprinklers, detectors, speaker systems, IT systems, etc. Thus far, however, this type has only been used in Europe because pricing, codes, and union-related issues have prevented its use in the U.S. 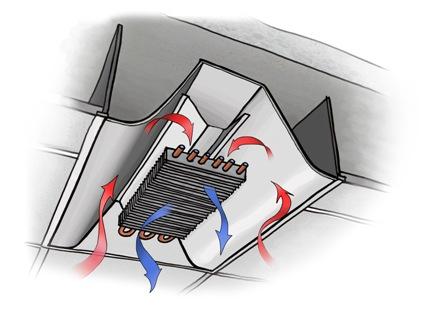 Passive chilled beams work via natural convection by locating the beam below the ceiling where the warm air on the ceiling can pass through the coil, which results in the heavier cool air from the coil falling to the lower-level occupied zone. They have no air supply and therefore require a separate air-handling system to provide ventilation air. They are usually best-suited to supplement other ventilation systems for perimeter areas in a building. 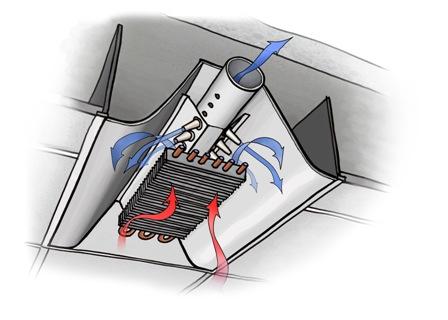 On the other hand, buildings with high levels of humidity, including old buildings with air leaks and operable windows, are not considered good candidates for chilled beams.

Active chilled beams offer many benefits including quiet operation, improved thermal comfort due to minimal air flow, few moving parts, and therefore reduced maintenance requirements. With this technology, ducts are not needed to deliver the comfort cooling, which can potentially reduce floor-to-floor ceiling height by about one foot, which in a 10-story building would save nearly an entire floor. Minimal space is needed for this type of system in the mechanical room as well, because chilled beam systems don’t require additional equipment or ducts.

Chilled beams also do not require electrical line power connections, so electrical wiring installation costs can be reduced. In addition, commissioning of a chilled beam system requires only adjustments to the water-balancing valves and primary air-balancing dampers through static pressure readings.