Geothermal heat pumps (GHPs) have come a long way since they were first introduced in the U.S. market somewhere around the late 1970s. What used to be viewed as somewhat of an alien concept by many homeowners has grown more mainstream, into a multimillion dollar industry in fact. According to GHP manufacturers, one out of every 38 new homes built in the U.S. in 2008 featured a geothermal system. 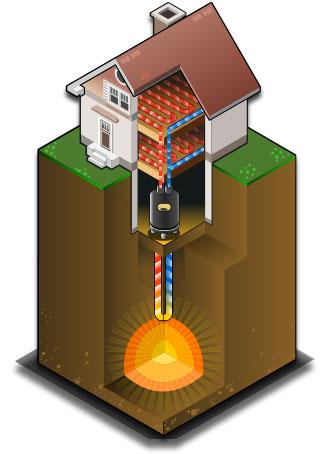 That translates into 2.6 percent of all homes; that figure was about 0.5 percent just a few years ago. Many factors have contributed to the growth, including more consumer awareness of the benefits of geothermal; increased demand for energy efficiency and reducing carbon footprint among consumers; technological improvements; more experience on the part of dealers and installers; high-quality training opportunities; and tax incentives for homeowners.

GHP efficiencies have gone up dramatically. Some of the technology improvements include variable-speed fan motors, variable speed or two-stage compressors and advanced controls. These all have led to increased comfort, better de-humidification and quiet operation.

There are four basic types of ground loop systems. Three of these—horizontal, vertical, and pond/lake—are closed-loop systems. The fourth type of system is the open-loop option. Which one of these is best depends on the climate, soil conditions, available land, and local installation costs at the site. All of these approaches can be used for residential and commercial building applications. 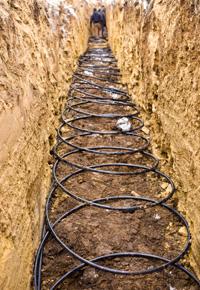 This type of installation is generally most cost-effective for residential installations, particularly for new construction where sufficient land is available. It requires trenches at least four feet deep. The most common layouts either use two pipes, one buried at six feet, and the other at four feet, or two pipes placed side-by-side at five feet in the ground in a two-foot wide trench. The Slinky™ method of looping pipe allows more pipe in a shorter trench, which cuts down on installation costs and makes horizontal installation possible in areas it would not be with conventional horizontal applications.

Large commercial buildings and schools often use vertical systems because the land area required for horizontal loops would be prohibitive. Vertical loops are also used where the soil is too shallow for trenching, and they minimize the disturbance to existing landscaping. For a vertical system, holes (approximately four inches in diameter) are drilled about 20 feet apart and 100–400 feet deep. Into these holes go two pipes that are connected at the bottom with a U-bend to form a loop. The vertical loops are connected with horizontal pipe (i.e., manifold), placed in trenches, and connected to the heat pump in the building.

If the site has an adequate water body, this may be the lowest cost option.   A supply line pipe is run underground from the building to the water and coiled into circles at least eight feet under the surface to prevent freezing. The coils should only be placed in a water source that meets minimum volume, depth, and quality criteria.

This type of system uses well or surface body water as the heat exchange fluid that circulates directly through the GHP system. Once it has circulated through the system, the water returns to the ground through the well, a recharge well, or surface discharge. This option is obviously practical only where there is an adequate supply of relatively clean water, and all local codes and regulations regarding groundwater discharge are met.

The biggest benefit of GHPs is that they use 25%–50% less electricity than conventional heating or cooling systems. This translates into a GHP using one unit of electricity to move three units of heat from the earth.  According to the EPA, geothermal heat pumps can reduce energy consumption—and corresponding emissions—up to 44% compared to air-source heat pumps and up to 72% compared to electric resistance heating with standard air-conditioning equipment. GHPs also improve humidity control by maintaining about 50% relative indoor humidity, making GHPs very effective in humid areas.

Today’s geothermal systems, using the earth’s natural energy, can heat and cool a home, and provide domestic water heating as well. They also can be used in combination with radiant floor heating systems, including systems integrated with solar panels, and can also provide heating for snow-/ice-melting and pools. The Environmental Protection Agency (EPA) touts GHPs as one of the “most efficient and comfortable heating and cooling technologies currently available” and estimates that ENERGY STAR-qualified GHPs use about 30 percent less energy than standard heat pumps. How much a homeowner can save in energy costs by installing a geothermal system will depend on their and the type of equipment to which it is being compared. For an example of a savings calculator follow this link.

Homeowners who install geothermal heating and cooling systems that meet ENERGY STAR requirements will now be able to take a tax credit on the total cost.

Previous legislation offered a one-time tax credit with a maximum credit of $2,000 for a single residence. The American Recovery and Reinvestment Act of 2009, signed into law on Feb. 17, 2009, extended and expanded the credit.

The new tax credits apply to equipment installed between January 1, 2009, and Dec. 31,2021 on a sliding scale for the tax credit percentage available based on the installation year.

Note: A credit of 10 percent of the total investment is also available for commercial system installations.