Thermal Energy Storage (TES) is a general term describing a technology that stores energy created at a particular time and makes it available to be used at a later time. The most common residential use of this technology is the making of ice cubes in the refrigerator at night for use the following day for keeping your drinks cold. In commercial buildings this same technology is used on a much larger scale, making and storing ice at night that is used the following day to cool buildings.

There are many reasons for using ice storage in buildings, the main one being dramatically reducing the cost to air-condition buildings. By shifting electric consumption to off-peak hours, ice storage reduces peak electrical demand and takes advantage of lower off-peak electric rates which translates into major cooling cost reductions.

A thermal storage system that uses ice as a storage medium can provide added cooling capacity for any system. The ice tank can be charged, waiting to discharge during unusually high demand periods, or as a backup to critical systems.

An ice storage system is used as an environmentally friendly, smart grid technology for cooling building occupants. Ice storage takes advantage of cleaner, more plentiful night-time electricity generation, which is increasing in renewable content, by storing energy to cool buildings the next day. Ice storage complements renewable energies, by helping to overcome the intermittency of renewable energy. For example, in the US, the generation electricity from wind is mainly at night, therefore this energy needs to be stored so it can be available during the on-peak hours.

Ice storage also helps to reduce source fuel consumption in many locations. Most base load generator plants are much more efficient as compared to “peaking” plants that come on during the day. By using night-time electricity to make ice and then storing it for daytime use, an ice storage system can be more (source) energy efficient compared to conventional instantaneous systems. Ice storage allows building operators to control when energy is used, decoupling the creation of the cooling from dispatching of cooling, allowing consumption of cheaper more efficiently produced energy when demand is high.

Ice storage is typically used in buildings that have large cooling loads during the day as compared to night time. The technology can be applied to new construction, retrofits, and building expansions. Typical applications include office buildings, schools, hospitals, airports, places of worship, data centers and buildings seeking LEED certification. Ice storage is a good option for lowering energy costs and environmental impacts, as a backup to critical systems, for reducing the size of electric services or cooling and heating equipment and to increase HVAC operating flexibility for system resiliency and redundancy. Ice storage should also be considered with electrical or cooling tower limitations because the chiller may be sized based on average load instead of peak load. This is because the system reduces peak demand. (For reducing peak demand with storage, refer to page 51.32 of Chapter 51 of the ASHRAE Handbook, 2016 HVAC Systems and Equipment.

In addition, ice storage can be modified to fit a variety of applications. Ice storage tanks are available in many sizes and configurations to meet the needs of the project. They can be buried in the ground, or placed in the basement, parking lot, or roof. 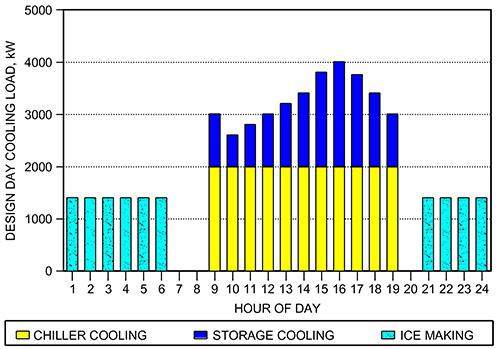 The construction consists of a tank to hold water and a tubular heat exchanger that will hold a coolant (antifreeze) and allow water to freeze on the outside of the heat exchanger. During the charging period, coolant at approximately 24°F (-4.4°C) is circulated through the coil and leaves the tanks at approximately 31°F (-0.5°C). The ice will form around the outside of the tubes in the water held within the tank. As the ice thickness continues to grow, the entering temperature will drop slightly. As ice forms around each tube, the remainder of the water will rise to the top and can be used to monitor the ice level in the tank.

Ice on Coil (internal melt)
Ice on coil (internal melt) is an ice storage technology in which tubes (coil) are immersed in water. The water never leaves the device. During off-peak hours, ice is formed on the outside of the tubes by circulating colder secondary coolant or refrigerant inside the tubing or pipes to build ice. During the discharge, when the building needs cooling from the ice storage device, the ice is melted internally in such a manner as to melt the ice closest to the tubing, by circulating warmer secondary coolant though the tubes and then to the building. 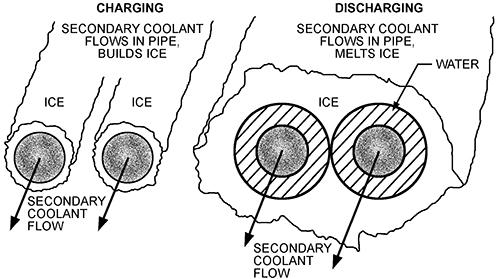 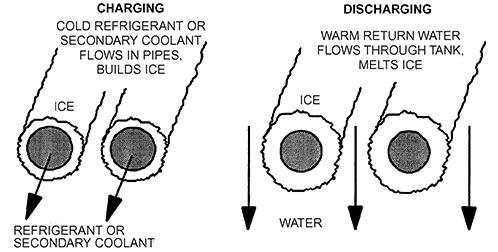 Unitary ice storage system
A packaged assembly including an ice storage device and refrigeration equipment for cooling and charging the device; overall performance is rated by the manufacturer.

Ice storage devices should be installed and supported level by the general contractor in strict accordance with the manufacturer’s directions. Because there are no moving parts, typical maintenance for storage tanks is minimal. The water level and glycol concentration should be checked annually.

ASHRAE Standard 189 states that new buildings need to include a 10 percent demand reduction over a conventional system. This directive can be accomplished by utilizing ice thermal energy storage. Starting in 2015, the U.S. Army will incorporate requirements of ASHRAE 189.1 on all construction and renovation of new buildings and structures in the U.S. territories, permanent overseas Active Army Installations, Army Reserve Centers, Army National Guard facilities, and Armed Forces Reserve Centers.

USGBC also has revised its standard to include demand reduction, offering points for building owners to reduce the overall demand of the building. In new construction, it is based on energy cost reduction, which may be achieved with thermal storage, thus helping with LEED certification. See GBI ANSI Standard ANSI/GBI 01-2010-Energy Section 8.2.2.1. The new LEEDv4 also offers up to 3 points in the Demand Response credit to encourage designers and building owners to think beyond the walls of the project, to consider the interconnection between energy use decisions (how much and when it is used) and the realities of energy generation and distribution capacity. Demand response credits are available for permanent load shifting as accomplished with ice storage.

AHRI Standards 900 (I-P) & 901 (SI), Performance Rating of Thermal Storage Equipment Used for Cooling, establishes a single set of requirements for the testing and rating of net usable storage capacity and auxiliary power input ratings for thermal storage equipment used for cooling; whereby, equipment performance ratings can be compared from product to product. The standard applies to thermal storage equipment used for cooling that may be charged and discharged with any of a variety of heat transfer fluids. The equipment may be fully factory assembled, assembled on site from factory supplied components, or field erected in accordance with pre-established design criteria.

All graphics on this page are courtesy of ASHRAE Handbook, 2012 HVAC Systems and Equipment.